“Impossible Foods is finding out what happens when a fast-moving venture capital business runs headlong into the staid world of government regulation. The FDA still wanted the company to show the ingredient was safe specifically for humans. It told Impossible Foods to establish the safety of the more than 40 other proteins that make up part of its soy leghemoglobin. FDA officials said the company’s assessment of the potential for the ingredient to be an allergen was deficient.”

The depth and breadth of plant proteins
have yet to be discovered.

• Currently only 8% of plant proteins have been used for food throughout the world.

• There will be many more new sources of protein that have new ingredients to replace animal products, and to earn full FDA approval, will sadly, likely require  testing on animals, typically rats.

• Keep in mind that expansion of plant proteins
​is essential to feed the world, end animal exploitation, save the environment, and assure food security for all. 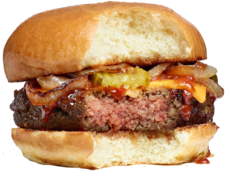 Generally Recognized as Safe (GRAS) vs. "No Questions" approvals by the FDA
I.F. made the agonizing decision to test this soy heme
on rats despite its original, extensive safety testing which earned the Impossible Burger's GRAS status.

This was in response to “the FDA's expressed concern that it [soy leghemoglobin] has never been consumed by humans and may be an allergen, according to documents obtained under a Freedom
of Information request by the ETC Group as well
​as other environmental and consumer organizations and shared with The New York Times.” (www.nytimes.com/2017/08/08/business/impossible-burger-food-meat.html)

The FDA's “No Questions” rating was essential for
Impossible Burger's unlimited world-wide distribution and use, and for ​the continued support of Impossible Foods’ many investors, including Bill Gates and Google Ventures.

PAT BROWN, CEO AND FOUNDER
OF IMPOSSIBLE FOODS:
“Getting a no-questions letter [from the FDA] goes above and beyond our strict compliance to all federal food-safety regulations,” Impossible Foods founder and CEO Patrick O. Brown said in a statement.
“We have prioritized safety and transparency from
day one, and they will always be core elements of
​our company culture.”
“Impossible Foods has been expanding despite last year's controversy. No longer only available at high-end restaurants, the meat substitute can be found at places like White Castle and the Oakland Alameda Coliseum. This spring, Impossible Foods made its first foray into the international market by expanding into Hong Kong."

Why the controversy of animal (rat) testing on its' key ingredient needs to be understood and why this burger is vegan.