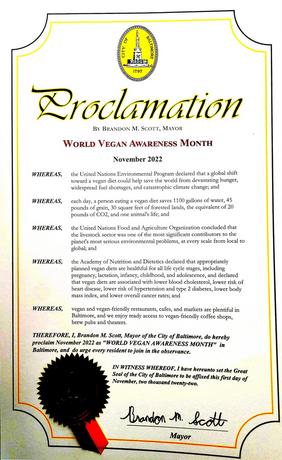 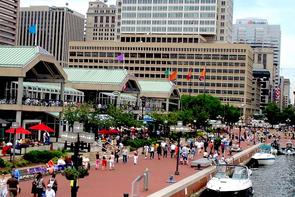 WHEREAS, the United Nations Environmental Program declared that a global shift toward a vegan diet could help save the world from devastating hunger, widespread fuel shortages, and catastrophic climate change; and

WHEREAS, each day, a person eating a vegan diet saves 1,100 gallons of water, 45 pounds of grain, 30 square feet of forested lands, the equivalent of 20 pounds of CO2, and one animal’s life; and

WHEREAS, the United Nations’ Food and Agriculture Organization concluded that the livestock sector was one of the most significant contributors to the planet’s most serious environmental problems,
at every scale from local to global; and

WHEREAS, the Academy of Nutrition and Dietetics declared that appropriately planned vegan diets are healthful for all life cycle stages, including pregnancy, lactation, infancy, childhood, and, adolescence, and declared that vegan diets are associated with lower blood cholesterol, lower risk of heart disease, lower risk
of hypertension and type 2 diabetes, lower body mass index,
and lower overall cancer rates; and

WHEREAS, vegan and vegan-friendly restaurants, cafes, and
markets are plentiful in Baltimore, and we enjoy ready accessto vegan-friendly coffee shops, brew pubs, and theaters.

THEREFORE, I, Brandon M. Scott, Mayor of the City of Baltimore,
​do hereby proclaim November 2022 as “WORLD VEGAN AWARENESS MONTH” in Baltimore, and do urge every resident to join in the observance.

IN WITNESS WHEREOF, I have hereunto set the Great Seal of the City of Baltimore to be affixed this first day of November, two thousand twenty-two.